My Tweets
Posted on May 22, 2012 by shawnfranssens

Every once in a while I forget what may be the most fundamental law of business:

“Maximize profit. Limit expenses.” (or “Get the Most for the Least.”)

Maximizing the return on investment is what businesses do.  If they don’t, they go out of business.

So, corporations generally want to see worker productivity high while keeping wages low.  Transportation costs are passed along to the consumer.  Quality control streamline processes and works to eliminate error so the same numbers of inputs becomes a greater number of outputs.

Getting the most for the least may not be the only business model, but it is likely the most pervasive.

So how can I forget it or be surprised when it shows up to pick my pocket?  Who knows, but I keep getting suckered.

Take the growing trend in releasing (and re-releasing) movies in 3D. 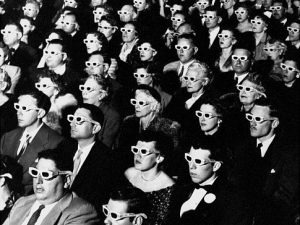 Having recently forked over $14 to watch a movie in 3D (a few thoughts on that flick here), I fell for the promise of 3D superiority.  “For the ultimate movie going experience, you must see this movie in brilliant, stunning, revolutionary 3D!”  Translation: If you want the “ultimate movie going experience”, you’ll gladly pay up to three times the price you could watch the “normal” version of this movie.  For what?  Is it really that much better?  Is it really worth the price?

I’m slowly coming to say, no.

For the limited special effects you get in a movie shot and created to be shown in 3D you do get some cool shots.  But an additional $10 per ticket worth?  For those movies “remastered” to be shown in 3D I have to simply say these Hollywood folks are brilliant.  Having already made billions on a film, adding a few less than stellar 3D moments allows them to milk a couple million more from us.

It’s a way of increasing profits without really adding much to the product.  It’s maximizing the return on investment without incurring much more in production costs.  Brilliant!

I keep falling for it.  When the 3D version of Star Wars: The Phantom Menace was released, I was there at midnight to watch.  Disappointing is an understatement.  Even the recently released Avengers wasn’t greatly enhanced by 3D (added in post-production).  At least not so much that folks seeing the plain, boring, flat 2D movie would feel shorted.

Still, with Finding Nemo coming out in 3D, I’ll probably plop down another chunk-o-change to get the full experience.

So, I’ve got to ask why?  I know it’s a business decision to separate a sucker from his money.  I know the movie won’t be significantly improved.  I know because I have experienced the results of 3D in a number of films.  So why am I still willing to go along with the sham?

More realistically, I’ll simply be a few dollars shorter at the end of the day.  The promise doesn’t get fulfilled.  Eventually, I’ll stop going to see these shows.

These are the folks asking, “Why do I need to go to church?  What do they offer that is any better than what I already have?  Do I really need to “pay” the cost of living as a 3D Christian when it doesn’t really look that much different from everything I’ve experienced in a 2D world?”

Now, I’m not interested in beating up the church.  As I’ve said elsewhere, I actually like church quite a bit.

So if we’re going to “sell” a 3D church, let’s start being 3D.  Not as a gimmick or a promotion strategy, but as a faithful witness to the Gospel!

3D should be more exciting and more interesting than 2D.  It should be at the movie theater…it should be with the church.

Life is better together,
Shawn

This site uses Akismet to reduce spam. Learn how your comment data is processed.